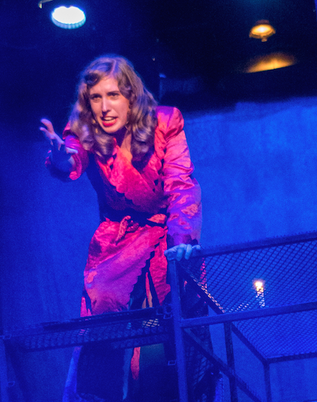 Miranda's indie improv team, Hobby Lobby Baby Hammer, has been performing all around town and just had a blast performing at UCB Subculture in Indie Cage Match!

Miranda was in the ensemble for the Choreography Lab of Passing, a new musical. It was presented at New York Theatre Barn as part of their New Works series.

Miranda is the narrator for the Seven Sons series by Kristen Osbourne and Amelia Adams. Currently the first three books of the series are available on Amazon.com (Adam, Benjamin, and Caleb.) Look for Book 4, Daniel, coming soon!

Miranda had a small part as a workshop attendee in the pilot of the new webseries Background, Action!

Miranda was a day player in the Chinese language feature film, The Other Child.

Miranda is now a member of the UCB Academy, the highest level of improv available at UCB. She has taken several classes at the Academy level and loved it!

Miranda will be playing Gladys/Margaret in a stage version of "The Nightman Cometh" at the West End Lounge on Monday, August 27th at 8 PM and Friday, August 31st at 7 PM.

Miranda appeared in the staged reading of 1000 Faces, a new musical based on the life of Lon Chaney. She was in the ensemble. There were two performances, one in NYC and one in New Jersey through the Arts Alliance of New Jersey.

Miranda played Miss Sandwich/et al in The Elephant Man at Skyline Theatre in Fairlawn, New Jersey. This was Miranda's second performance with Skyline and it was great to be back in Fairlawn!

​Miranda has been working hard on several audiobooks that are now available on Amazon.com and Audible.com. Check out the Lazy Love series by Kirsten Osbourne and Murder in the Mist by Loretta C. Rogers to hear Miranda in action.

Miranda has completed Improv 101-301 at the Upright Citizens Brigade. She is enrolled for 401 starting in September.

​September 2017
​Miranda just finished up a run of My Fair Lady with Skyline Theatre in Fair Lawn, New Jersey. This ten person, two piano version of the show was a blast to be a part of! Miranda played Mrs. Higgins and a member of the Ensemble. The show ran three performances and was sold out for two of them!

​Gypsy at Great Plains Theatre was a success! A reviewer with the Manhattan Mercury newspaper wrote, "...And then there were the strippers...The GPT 'Gypsy' had a fabulous trio of strippers [Miranda West, Jamie Finkenthal, and Randa Meierhenry] to give Louise advice in 'You Gotta Get a Gimmick." (G.W. Clift, Manhattan Mercury.)

​​
June 2017
The run of Mamma Mia at Great Plains Theatre ended with another sold out weekend! This season at GPT has sold more season tickets than any other season in the past 23 years of the theatre's operation.